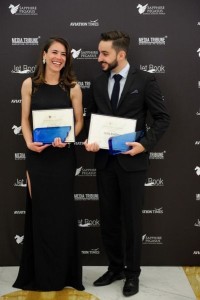 Erica’s aviation career began in 1997 when she joined Jet Aviation. She then moved to Pilatus Aircraft in Switzerland. She quickly proved her talents to herself and others, despite the determination of tricky clients to initially focus on the fact that she was both young and female. She wanted to run her own business and in 2009 she moved to Glaronia Aviation from Comlux Aviation (where she headed charter sales), to become Partner and Managing Director responsible for operations. In 2010 she co-founded Vertis Aviation with partners Luca Madone and Jeffrey Emmenis. Erica has fitted well into the typically male-dominated world of aviation by demonstrating she has the same skills, talent, tenacity and attributes to run a business. Accepting the award from one of the judges Vladimir Petak, Chairman of Sapphire Pegasus Advisory Board and CEO of ABS Jet, she commented: “If you work hard, whether male or female and earn the respect of your colleagues, you can achieve as much as each other. I love this industry and am thrilled to have been nominated for, and then received this award. It makes all the hard work worthwhile.”

Vertis Aviation’s niche in providing an independent outsourced sales department for its partner operators grabbed the judges and online voters’ attention to win the Innovation in Business Aviation category.

Their business model, which has delivered rapid growth for the company, ensures operators can concentrate on their core business providing superior aircraft management services, whilst Vertis focuses on supporting their charter business. Vertis has also created its own customer service management software that supports the business’s “You can call us, anytime” philosophy. This boutique approach to chartering long range aircraft has helped forge a global business which within six years has grown from a team of three partners and one employee with one aircraft operating from a single office, to a double digit personnel business, present at four international offices, marketing 15 aircraft. It has changed the way operators think about marketing long-range aircraft, and ensured customers are treated as individuals with their own independent requirements taken care of.

“We like to think we have opened a market for the smaller operators that manage long range aircraft, and that we have handled a passenger request before they even know they need something,” says Da Veiga. This provides a seamless experience for all concerned.

The Inaugural Sapphire Pegasus Awards, founded by Media Tribune’s Antonia Lukacinova, were designed to recognise and honour outstanding performances by companies and individuals in many aspects of Business Aviation. A total of 13 awards were presented at a gala dinner at Prague’s luxury Boscolo Hotel.

“Erica is great example to all women in aviation and I hope this Award will help attract even greater attention to the achievements of women in the sector,” – SPAA’s Antonia Lukacinova